Skip to content
Date: February 21, 2018Author: It's All One Struggle at Base 3 Comments

This post marks my first attempt to conceptualize the place of Prison News Service: a Bulldozer Publication/The Marionette in a genealogy of radical opposition to the U.S.  prison regime and industrial complex. It is derived from research notes and will continue to grow and change as my intellectual obsessions endure. Through the 1980s and 1990s, the editors of Prison News Service weaponized the prison rag as a medium for radical-to-revolutionary organizing in North American prisons. Issues also included The Marionette, a publication edited solely by white anti-imperialist political prison/prisoner of war Bill Dunne. Some background on the editorial collective Bulldozer is provided by the Freedom Archives.

The Bulldozer collective was formed in February 1980 when 4- 5 activists from various places in southern Ontario decided to put out newsletters (Prison News Service/ The Marionette) dealing with prison-related issues.

As an article in a 1995 Prison Legal News states:

“Bill has never stopped struggling since his arrest and imprisonment in October of 1979. The Washington state system sent him to the federal system simply for editing WPNS (Washington Prison News Service), a prisoner run newspaper. After the escape attempt in 1983 he was eventually sent to the notorious control unit of U.S.P Marion that existed at that time which was essentially a prison within a prison. After arriving there in 1985, he was there for the next 7.5 years. While he was there he edited the Marionette, an important newsletter that exposed the destructive conditions of that prison. The Marionette grew into Prison News Service which was a paper that was much more broadly focused.

Also, in deep solidarity with all political prisoners and the movements they all do come from Bill has contributed to projects that work to help give a voice to political prisoners and help provide material support as well. Some of those projects include 4strugglemag (4strugglemag.org), and Running Down the Walls, an annual 5k run fundraiser where all the money raised goes towards prisoners the Anarchist Black Cross does support work for. (https://itsgoingdown.org/date-support-flyer-political-prisoner-bill-dunne/)

Bulldozer was innovative in their commitment to disarticulating the narrative “inside/outside” binary that liberal reform movements impose on emergent prison radicalism. Back issues of Prison News Service archive an analysis, aesthetics, and counter-mythology that fundamentally diverges from the common notion of the prison/jail as a reified “elsewhere.” Instead, they chose the method and orientation of an insurrectional bulldozing of the carceral-police regime’s most visible material and symbolic strictures — its concrete, steel, and razor-wire.

The cover art of Prison News Service is a standout feature. What is most striking in the archive of PNS is its relentless demystification of structures and practices of gendered racist oppression and domination. The work of the newspaper was to capture a fantastic realism perspective and framing of the content, of a largely underground movement of Black/New Afrikan anarchists and revolutionists wreaking havoc on the System from within.

Each issue grapples with the who’s, what’s, where’s, how’s, when’s, and why’s of a state-condoned culture of genocidal domestic warfare, tracing the technologies and processes of policing and racist incarceration that overdetermine contemporary social existence. Articles in the 1993/1994 issues begin to target the imperialist discourse of “anti-terror” and rigorously unpack the anti-Black racism girding civil society’s (liberal-to-progressive) “anti-gang” movement.

These maneuvers are symptomatic of a more general narrative-strategy embraced by the Bulldozer collective that centers the “insurgent” (as opposed to the innocent/guilty) social-historical subject. This privileging of a combatant subject in perpetual guerrilla war against the authoritarian state radically upends civil society’s conceptions of “assimilability” and “incorporation” (touchstones in the Establishment Left’s lexis of co-optation). This is because what drives, shapes, and permeates the pages of Prison News Service and the Marionette is what Rodríguez (2006) refers to as “radical prison praxis.” That is, the “embodied theoretical practices that emerge from imprisoned liberationists’ sustained and historic confrontations with, insurrection against, and dis- or rearticulations of the regimes of (legitimated and illicit) state violence inscribed and signified by the regime of the prison” (107).   The Bulldozer collective curates a textual medium that traces historical continuities between struggles over social power, specifically Black/Third World liberation, Native sovereignty, and anarchist struggles against the capitalist, white supremacist settler state. Connecting histories of slavery, colonialism, and imperialism to the present-tense contexts of (prison) slavery, (neo)colonialism, and (NATO) imperialism is the stuff of PNS.

The continuities of struggles against state power make themselves known through rather simple and subtle analytical moves. These gestures include connecting past to present-tense movements through storytelling (memory work) and promoting the work of imprisoned and non-imprisoned PP/POW solidarity organizers. This latter effort is well documented in books such as Can’t Jail the Spirit, NOBO’s Black Prison Movements U.S.A., Chinosole’s Schooling the Generations in the Politics of Prison, and Elihu Rosenblatt’s (ed.) Criminal Injustice: Confronting the Prison Crisis.

Though not a demographically Black editorial staff, sustaining a tradition of Black radical becoming was major feature of the newspaper, both latent (unintended) and manifest (intended). “Manifest” in that the writings of imprisoned radicals were strategically placed to generate consciousness with some sense of motive will towards Black liberation. “Latent” in that the representation of radicals such as Assata Shakur clearly influence who in fact these continuities can be read through. That is, such names and figures carry a certain irremovable marking/branding inflicted by the prison regime, which in turn refracts and makes them examples for future generations to model themselves on. Each prisoner whose words/art graced the pages of PNS connects one generation to another—this is the spiraling, converging, diverging, and vacillating of social and historical movement that we call the revolutionary prison struggle.

Contrary to common narrations of the prison movement’s “low ebb” in between 1970s and 2000s, my engagement with Prison News Service/The Marionette shows how the 80s and early-90s witnessed a blossoming of insurrectionary intellectual labor and a proliferation of physical confrontations with the prison regime. Largely presumed a period of downturn or regression in prison activism, the 1980s and 1990s mark a rather vibrant period of movement-building and experimentation with the methodological art/science of social revolution. Looking at the print culture and pedagogical architecture of the prison struggle during this historic moment is an interesting place to begin. But regardless of the historiographic connectors that are visible throughout the PNS archive, what is most interesting are the discontinuities that this newspaper brings to the fore. 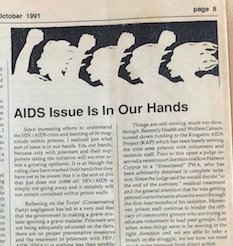 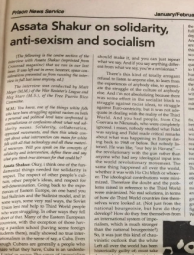 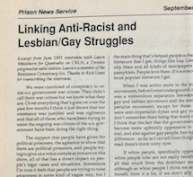 When reading PNS, one finds a rebuttal to the dominant conception of “nationalism” and “internationalism” as limited analytics in the discourse of Canadian/U.S. political progressivism. To some degree, Bulldozer’s weaving of revolutionary nationalism into an overwhelmingly anarchist publication poses a unique problem for theorists who a priori assign the connotations of sexism, masculinist violence, patriarchy, paternalism, and phallocentrism to Black/New Afrikan political forms.  There are frequent amendments to articles throughout every issue that demonstrate a mass-based will-toward-reflexivity among the authors vis-a-vis the gender and sexual dimensions of the Black/New Afrikan prison struggle, and the North American prison struggle more holistically. Side-note and criticism: if we really look closely at the “types” of masculinities that bubble up in Bulldozer’s publications over the years, a sense of complexity permeates an archive that is often given essentialist inscriptions for male egoism and sexism by mainstream Black culture critique.

Both “nationalism” and “internationalism” emerge in PNS and The Marionette much closer to what I would consider a correct approach to anti-systemic movement building in a global register. The “national” base — among a multiplicity of cultural bases wherein the masses collectivize and engage in revolutionary self-activity — is more akin to a extra-national base. It is something beyond the “nation” thing as it is commonly interpreted. Internationalism, here, appears more akin to a globalization of connections between differently situated communities of struggle, which could or could possibly not be “nations.” In this convergence of revolutionary nationalism on the “inside” and free-world prison activists (mostly embodying an emergent abolitionist tendency), we see the development of a conceptual framework and collective cultural basis for insurgent cohesion to materialize between a unity of plural activist forms. All organized, of course, by the objectives of smashing the white supremacist police/prison state.

Finally, each issue of PNS has a resource guide on the closing pages, which includes addresses for prisoners to write in and practice support across a variety of different concerns. When reading through this collection, the most striking thing for me is how apparent the newspaper operated as a point of building and organizing across “inside” and “outside” geographies, a role played more recently by organizations like the Oakland based Prison Activist Resource Center (PARC), whom provide a similar service in the face of stark barriers to funding and limits in its communicative reach.

to be continued, i got tired of writing…..

Welcome to my Workspace

This website tracks my dissertation research, and some related archival things